One is the loneliest number, at least that is what the old song says. After I built the Shabby chic Floor Lamp it seemed only right to make a table lamp that fit in with the similar style. This little guy is built using some leftover parts of those same pieces of wood. If you look at the bottom right edge of the vertical post there is a rough aged piece of wood, and the top left is similar. Both are from that leftover fence post.

The white piece has an interesting story behind it too, I got it from the ladies over at Lazy Daisy Salvaged Creations they had it sitting around and were planning on doing something with it but couldn’t come up with an idea just yet. I was in their shop because I listed both of these lamps there for a few months trying to sell them. The day I brought in the floor lamp made from 4×4’s sparked the idea that maybe if they gave me the white post I would find a use for it.

Soon after the idea for this lamp to complement the floor lamp came to mind. However I didn’t want to just make a miniature version, I wanted something that matched well but was just enough different. I settled on the chopped up pattern because I like the way the staggered color lines look, and by cutting the pieces in half it meant making a channel for the wiring to go through would be easy compared to trying to drill a long hole.

The base of this lamp was my first time creating the hash metal grating, later I used the same technique on the Kitchen Calendar project I did.

The 2 side pieces have grooves cut in them the thickness of my table saw blade that the metal grating fits snug right into.
Underneath the metal is a thin piece of old oak fence post that I sliced up. Then stained it a dark color and brush painted white over it. A little sanding and it had just the aged look I was going for.

The top pieces of wood you see are all from old pallets that I stained giving it a nice warm seasoned look. I intentionally went heavy in some spots with the stain to give the appearance of more uneven weathering.

For the neck this time around instead of using galvanized pipe I mixed it up and went with standard electrical conduit without any painting. In the end the look is similar, but just the change up that was needed.

To mount the neck to the post I built a custom block out of plywood, drilled a hole for the electrical conduit connector and then used 4 screws to mount it to the post. I try to build most of my lamps with a connection point here so that it can be taken apart and serviced is ever needed. 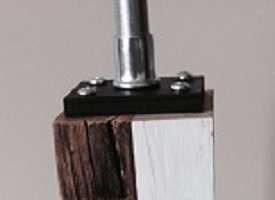 After all that it was just a matter of slapping on 4 adjustable screw feet on the bottom of the base and then a standard issue white lamp shade.