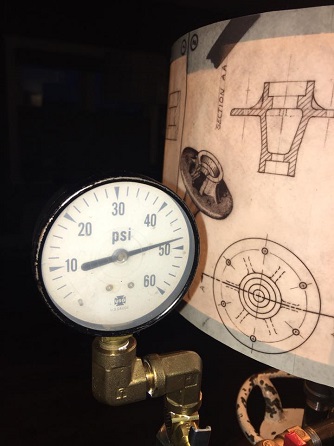 We have seen an explosion in all things Steampunk over the last several years. Anybody into this kind of stuff has probable watched the Netflix season of Steampunk’d, I know I did. It wasn’t until then that I realized the full scope of the movement.

One of the things I have noticed about most lamps or home decor people produce is that the gauges not only lack movement, but they usually are just stuck at zero. Makes sense right, there is no air pressure built up. In this small article I am going to share my trick for how I got 3 air gauges on my Fire Extinguisher Lamp to have air pressure to give a more real feeling to the project.

The Secret: I added air shut off valves and 1 air tool nozzle port. Below is a picture of just the air gauge portion of the lamp which I made it to be separate from all of the electrical components allowing me to trap the air in the pipes. The large red valve keeps air from leaking into the electrical side of the lamp. The small silver shut off valve traps air only in the top gauge allowing a separate pressure from the other two gauges. At the bottom is a small shut off valve near the air nozzle port. I connect my air compressor, fill, and then close the valve. 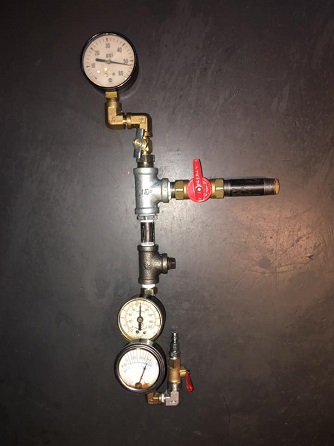 Join my email list for more tips, tricks and early notification of new products for sale.