Home » Restored Projects » The first restoration project that started it all, The Box

My grandfather was by trade a machinist, but his hobby seemed to be to collect things. Sometimes way more things than he really had space for. Living on a 2 acre old farm it was very common for things to be set somewhere in a field or a patch of woods and then forget to move it for 20 or 30 years.

He had this vehicle in an area that was old, rotted out, and started to become part of the woods itself. Nearest I could tell it was some kind of a truck, almost like an ice cream truck because the back end of it was really just a large box. I had known about this for years, but one day I decided to take a deeper look inside. It was filled with all kinds of random things: wooden chairs, old bed box springs, miscellaneous plumbing parts, nuts & bolts etc. After a little digging around I found what seemed like a wooden tool box.

It wasn’t in great shape; the wood was badly weathered and the outside had what was left of a thin metal sheeting that at one time I think must have covered almost all of the wood. Most of the hardware was also rusted away so the hinges on the lid were no longer connected. I pulled it out of the truck and got it out of the woods to get a better look at it.

Turns out the box had cloth material on the inside that was badly tore up and only pieces of it remained, but I could tell early in its life it must have covered most of the inside of the container. At the bottom of the box was some kind of resin material that looks like it had spilled and over time hardened. Mainly collected at one end stuck in all this goop was a bunch of old screws, springs and other tiny parts. Really made me think this was a tool box.

My grandfather has since passed away so I can’t ask him if this is his, or where he got it if it wasn’t, but I do like to use my imagination sometimes and think of somebody carrying this thing all around their house or work shop filled with tools and anything else they needed at the time.

Whoever’s it was then, it is mine now. You wouldn’t believe the work I had to go through to get this thing cleaned up enough to want it in my house. First I spent hours chipping away at that resin to get all that junk out of it. Once that was done it was on to sanding the wood wherever I could, just lightly using a high grit sandpaper. Mainly I just wanted to clean the wood at this point and get it ready for finishing. Next I used my air compressor to blow all of the dust and debris off. Once it was all prep’d I moved on to using a polyurethane spray to seal the wood and metal in an effort to prevent further decay. Several coats later I put a few sticky padded feet (the kind you put on chair feet for hardwood floors) and I was ready to display it.

It has moved a couple times in its new life; but right now it sits displayed above my kitchen cabinets and looks great behind the twinkle of some Christmas lights I turn on at nighttime. 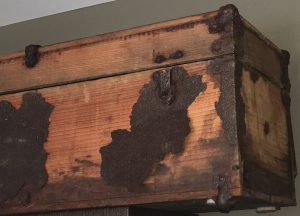